idb is formed of two components that have different responsibilities. Both these components are necessary for idb to run commands.

This is a python3 cli that exposes all of the functionality that idb has to offer. As it is written in Python, this does not need to be run from the Mac to which your iPhone or iOS Simulator is attached.

This client library can be imported into your own python3 code if you wish, or the CLI can be called from any other kind of automation.

The idb_companion is a gRPC server in Objective-C++ that runs on macOS. It talks to the native APIs that are used for automating Simulators and Devices. It links the FBSimulatorControl and FBDeviceControl Frameworks, which are part of the overall idb project.

When the idb_companion acts as gRPC server, it does so for a single iOS target (a device or simulator).

Additionally, the idb_companion has some commands that are deliberately unavailable from the python CLI, these operations are related to iOS Device management or operations on the lifecycle of a Simulator. 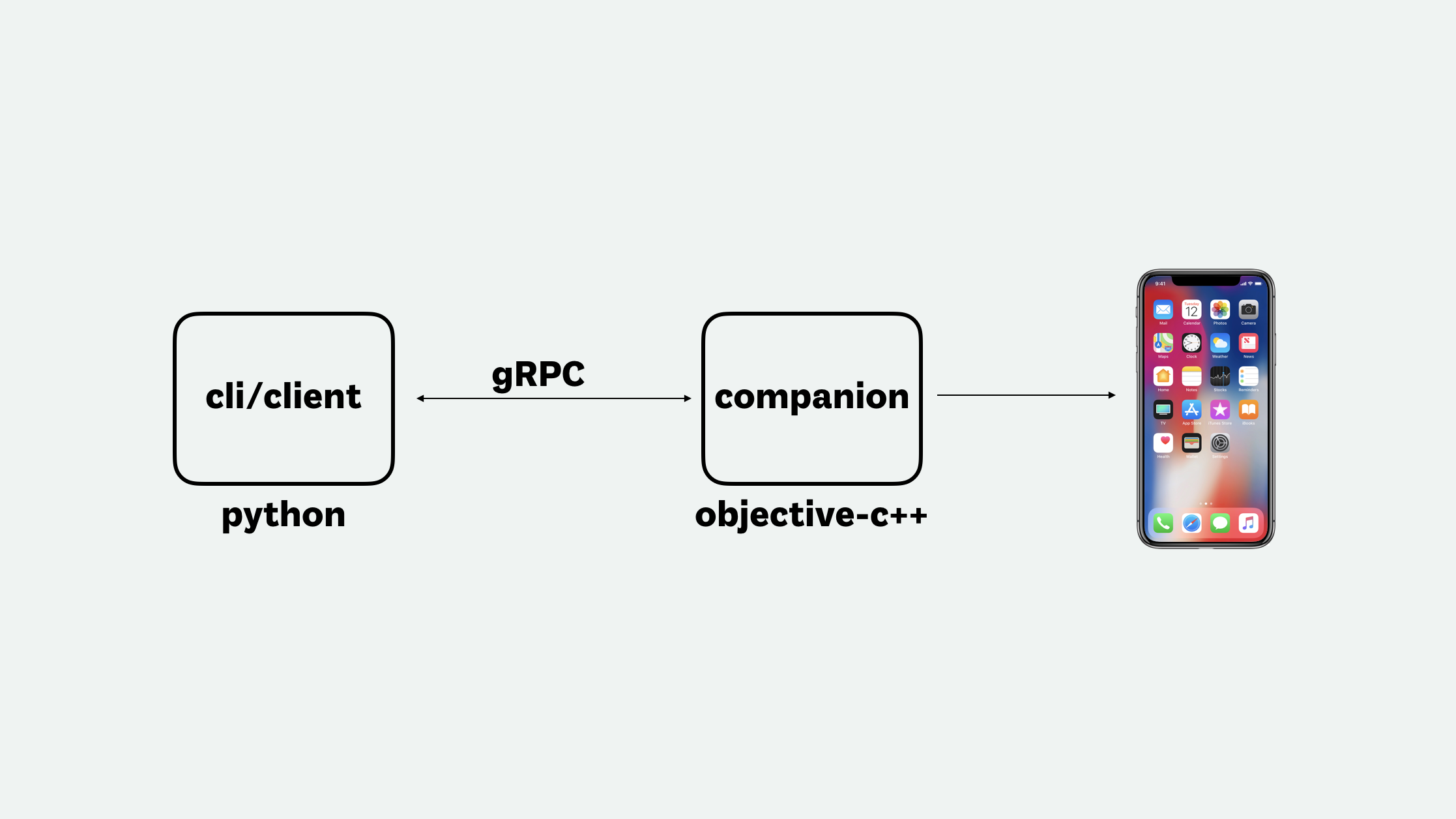 The idb cli will, by default operate in one of two modes:

There are two frameworks in FBSimulatorControl and FBDeviceControl that exist to implement the majority of the functionality used by idb. Additionally, there is the FBControlCore Framework that exists to define common interfaces for the Device and Simulator Frameworks and to provide other functionality that is common to both. These Frameworks are able to be used independently of idb itself. This is an overview of how these Frameworks are designed together

A instance of a target (FBiOSTarget) is an object that represents a single iOS Simulator or Device. FBiOSTarget is a protocol definition that describes the functionality that is implemented by both FBSimulator and FBDevice. This abstraction means that higher-level applications and Frameworks are able to treat a target the same, regardless of whether it is an iOS Simulator or Device.

As there are substantial differences in the way that iOS Simulators and Devices operate, this level of abstraction allows the Frameworks to smooth over the differences present in implementing common functionality.

A "Target Set" (FBiOSTargetSet) represents a collection of targets. These are implemented in both FBSimulatorSet and FBDeviceSet. A Simulator set represents a root directory that is common to a number of Simulators. A Device Set represents all of the Devices attached to the host.

Across the Frameworks, there are "Configuration" values, implemented as Objective-C classes. These are typically used for consolidating all the information required for a particular API call. For instance FBApplicationLaunchConfiguration defines launch arguments, environment and launch modes.

These types exist so that APIs do not require extremely long and cumbersome argument lists, as well as providing sane defaults. These types are intentionally as behaviour-less as possible, close to pure value types.

In order to keep a common APIs between Simulators and Devices, idb has a set of Objective-C protocols that define an interface for separate implementations across iOS Simulators & Devices. This does encourage the creation of well thought-out APIs. The idb_companion can be agnostic to the underlying iOS target, instead interacting with these protocols.

There may be some protocols that are only supported by one or the other, depending on the target. For instance there is no concept of "Activation" on an iOS Simulator, so FBDeviceActivationCommands is only implemented by FBDevice. Where a target does not support a given protocol, idb will fail when these APIs are called, giving an error message that explains what functionality is missing.

If functionality is common to both Simulators & Devices, it's protocol is added to FBiOSTarget so that implementors of FBiOSTarget are required to implement it. For functionality that is not common, the relevant protocol is added to the definition of the concrete FBSimulator or FBDevice class. For non-common protocols, the caller must either check for protocol conformance before calling an API, or use the concrete type directly.

FBControlCoreLogger is used throughout the codebase. This provides a common interface for logging out to system level loggers as well as files. Since all these Frameworks may be used in a variety of different scenarios, included where a logging client may be remote, this abstraction provides a common way of directing logs to the appropriate place. This is an "unstructured logger", which receives arbitrary strings.

There are also classes that are used for intercepting internal calls (FBLoggingWrapper) and logging them out to a "structured logger" (FBEventReporter). This is used in idb to produce accurate logging of all API calls that are made in the server. This supports user-defined classes, so is ideal for pushing into datastores that support aggregation.

Due to the nature of the functionality that is offered in the Frameworks, IO is a very common task. There are a number of abstractions for reading and writing data between various sources and sinks. For example, the common interface (FBFileReader) is used to read output from a spawned Application process and relay it to a consumer (FBFileWriter). This is then used to pipe Application output over idb's gRPC interface without the Application launcher having to be aware of what is consuming the output.

All of this is backed by libdispatch, due to it's affordance for asynchronous IO, where file reading and writing is managed in an efficient manner without the user having to build their own IO multiplexer.

A huge amount of the "work" that is done inside the Frameworks is based on IO and calling out to other APIs that perform IO. This work is very asynchronous, which means that there is a strong case for a consistent API for performing and waiting on this work.

Since the Frameworks are Objective-C Frameworks, as well as the absence of an API such as async/await within the Swift language, the FBFuture class is used to encapsulate this asynchronous work. It is preferable for these features to exist at the language or standard library level to avoid implementing this kind of functionality, however there are benefits to doing so:

Code that is a consumer of FBFuture can use it's calls to receive a callback upon completion, or to await: it's result synchronously to obtain a value. The internal usage of FBFuture avoids any synchronous work as far as possible. A consumer of idb need not be aware of these details, as they are internal to the implementation of the idb_companion.

The majority of what the idb_companion does is to act as a gRPC server to all the functionality across the FBSimulatorControl and FBDeviceControl Frameworks.

It does have a handful of components that are important to the way that it operates.

This is the entrypoint to the idb_companion and includes all of the various flags that are supported by it. This is used for specifying how the gRPC server should be started for a given iOS Target.

Additionally, it exposes a number of "CRUD" commands that are destructive for managing Simulators and Devices. These commands are intentionally left out of the gRPC interface, to prevent unwanted behaviour. If you wish to perform destructive commands, these must be performed on the host where the iOS Simulators or Devices are present.

This is an C++ class that implements the gRPC interface. This is a C++ class as the idb_companion is using the gRPC library for C++.

Requests are forwarded to the handler on a thread pool that is internal to the gRPC C++ library. The overwhelming majority of calls made to the companion will call out to APIs that are backed by an FBFuture. This means that the handler thread is then responsible for awaiting the resolution of that FBFuture. Each handler call is wrapped in an autorelease pool to prevent memory leakage. The calls to the underlying Frameworks will serialize work appropriately, due to their usage of Futures.

This is a pure Objective-C class that provides a facade over the many APIs in the underlying Framework, so that the service handler does not need to be aware of how they operate. This also means that C++ only needs to be used where it is necessary, so that if the gRPC handler is ever migrated to Swift there will be minimal implementation in the handler.

Before calling the command executor, the service handler needs to convert C++ types to their Objective-C equivalents as request and response objects are expressed via C++ protobufs.